It is not often twin siblings are awarded doctoral qualifications at the same time, in the same field of study; but it happened at the University of Johannesburg (UJ). At a recent graduation ceremony, twin sisters Dr Suzanne Graham and Dr Victoria Graham were awarded their PhD’s in Political Studies.
The Graham twins are both lecturers at UJ and their doctoral degrees illustrate the University’s commitment to improve the qualification profile of its academia through the Staff Qualifications Programme. The Staff Qualifications Programme, initially focused on enabling all permanent academic staff to hold at least a master’s qualification, and is now focused on raising the percentage of staff with a doctoral qualification to nurture UJ as one of Africa’s finest institutions. The programme makes available a variety of support, including some research funding, an extensive and well-attended programme of research development workshops, writing support, and some teaching relief during the writing up phase of the research.​
The Graham sisters matriculated in 1998 at Mondeor High School, South of Johannesburg, after which they enrolled for BA Journalism with Politics as their second major at the former Rand Afrikaans University (RAU), now UJ.
The Graham sisters were appointed as Student Assistants within the UJ’s Politics Department. In 2002, they completed their Honours (cum laude) and became tutors in the Department. In 2005, the sisters obtained their master’s qualification, each with a different focus area.
Suzanne’s research was based on “Terrorism”, while Victoria’s research focussed on “South Africa’s Quiet Diplomacy in Zimbabwe and Nigeria”.
In 2006, they joined the University as contract junior lecturers and in 2008, Suzanne was appointed as permanent lecturer within Department. Suzanne’s PhD research focused on “South Africa’s voting behaviour in the United Nations from 1994-2008”, and Victoria’s PhD research on Assessing the quality of democracy in South Africa from 1999-2012”.
Both the Graham sisters agree that it wasn’t easy juggling thesis work and teaching obligations. “We are proud to be associated with an institution that continues to give staff and students opportunities to reach their full potential.” 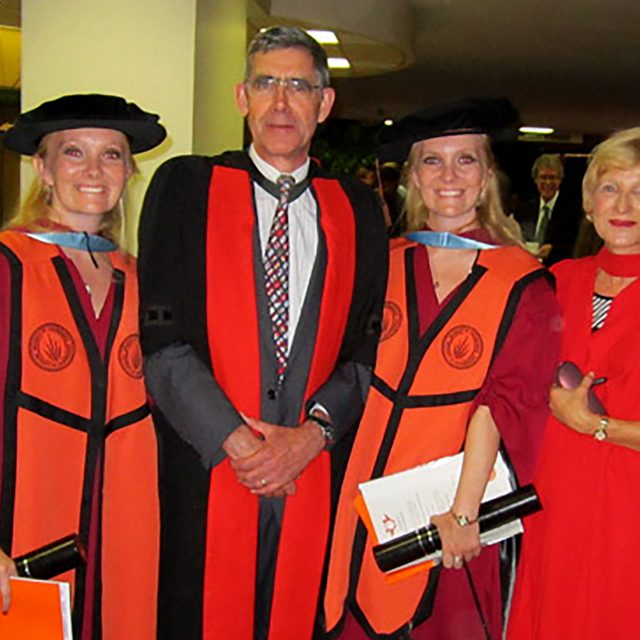