​​The official opening of the Gloria Sekwena Gate took place on Thursday, 3 April 2014, at the University of Johannesburg (UJ) Auckland Park Bunting Road Campus.
The tragedy that marked late application walk-ins at the University of Johannesburg (UJ) in 2012 highlighted the desperation of tens of thousands of young people in South Africa yearning for a quality education.
Masses of late applicants to UJ lined up outside the University’s Bunting Road Campus in the hope of getting a place to study and better their and their community’s lives. It took the tragic death of a mother and UJ Alumna, Ms Gloria Sekwena, to highlight to South Africa, the dire need for accessibility in the Higher Education sector. Ms Gloria Sekwena, died when the crowd, desperate to gain a space at UJ, surged forward crushing people against the gates.
To honour the memory of Ms Gloria Sekwena, and what her death symbolises, the University officially opened the Gloria Sekwena Gate at its Bunting Road Campus on Thursday, 3 April, 2014.
UJ Vice-Chancellor and Principal Prof Ihron Rensburg said that the monument served as a remembrance of the life of a person and its meaning.
“The name takes on new meaning for millions who will pass through this gate. They will ask who Gloria Sekwena is, and they will learn about hope and pain, and the sacrifice made for them to be there,” said Prof Rensburg.
Sekwena’s uncle Mr Tshepiso Ramphele, who spoke on behalf of the Sekwena family, said the remembrance will help the family heal. “This monument is the bittersweet symbol of the loss that will be with us forever. Time heals, and this monument will help is heal even more,” he said.
At the ceremony a blessing was given by Father Bistro of the Roman Catholic Church, and thereafter the UJ Choir sang as Sekwena’s widower Joseph Seun Sekwena, along with Prof Rensburg and UJ Chairperson of Council Prof Marcus, cut the ribbon and revealed the monument.
UJ Chairperson of Council Prof Roy Marcus in his closing remarks, said: “She will teach us new values.” 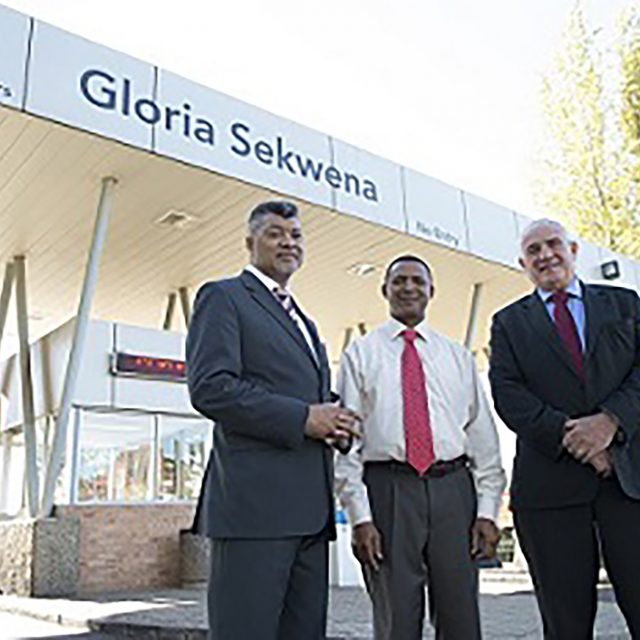