UJ’s Geology Department was honoured to host the 9th Annual Meeting of the Igneous and Metamorphic Studies Group (IMSG) from 15 to 18 January 2017. The IMSG started in Pretoria in 2008 as a forum for geologists with an interest in igneous and metamorphic petrology and related topics to present and share their latest research findings.

Instead of the confines of a lecture hall, the event was held in the Glenwillow Meeting Room at Glenburn Lodge, in the Muldersdrift area about 33km northwest of Johannesburg city centre. The highest number ever, 106 registered delegates, indicated the popularity of the meeting. An ice-breaker was held on Sunday evening, with the formal meeting starting on Monday morning with a welcoming address by Professor John Clemens of Stellenbosch University.

The presentations on, amongst others, aspects of metamorphic geology, granitic intrusions, Bushveld Complex mineralization, and meteorite impact systematics were of a very high standard, and thanks are due to all the presenters for their efforts, the Department said. In addition, the 28 posters that were presented were elicited much discussion. UJ was well represented with four talks and eight posters in all.

Robyn Ormond, a 2016 UJ Geology Honours student, won the IMSG prize for the best student presentation. She studied the enigmatic Zwartkops rocks in the Muldersdrift area for her Honours project, and has enrolled for a Masters’ degree at UJ on a related topic.

A Wednesday morning field trip took in two traverses across the 3 200 or so million-year old granitic rocks that comprise part of South Africa’s geological foundation. The complex rock outcrop on the farm Nooitgedacht, about 4 km south of Lanseria Airport, was well explained by Professor Emeritus Carl Anhaeusser of the University of the Witwatersrand, who mapped and studied it in detail in the late 1990s.

The meeting and field trip were an unqualified success, due mostly to the efforts of Professor Marlina Elburg, Dr Trishya Owen-Smith and Dr Jeremie Lehmann of UJ who bore the bulk of the organization. They are to be thanked for their hard work, as are the various sponsors of the event, which kept the costs down, including the Department of Geology at UJ, the Palaeoproterozoic Mineralization study group (PPM) and the DST-NRF Centre of Excellence for Integrated Mineral and Energy Resource Analysis (CIMERA), the latter two hosted by UJ. 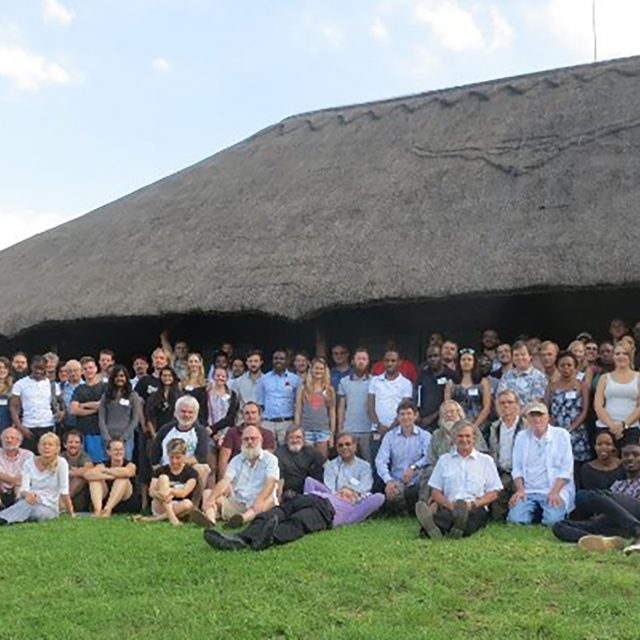