From a comet to Homo naledi: UJ boasts SA’s most advanced isotope dating expertise and equipment

When the discovery of a possible human ancestor, Homo naledi, was announced, one of the first questions to arise was: “How long ago did these hominins live?” The University of Johannesburg (UJ) is one of a handful institutions globally working on this, under the expert guidance of Prof Jan Kramers, who has developed new methods of dating cave deposits. Prof Kramers was ceremonially inaugurated as Professor of Geology at UJ on Monday 13 September 2016.

“All the analytical work necessary for cave sediment dating is now possible in-house at UJ, and ultimately H naledi will also yield the secret of its age. Homo naledi has posed a particular [dating] challenge because the fossils are not situated in a flowstone-bounded stratigraphic unit,” said Prof Kramers in his inauguration address.

“Recently the UJ Department of Geology was very fortunate to install a multi-collector inductively coupled plasma mass spectrometer (MC-ICP-MS), coupled to an excimer laser, obtained under the NRF’s National Equipment Programme through the initiative and effort of Prof Marlina Elburg of the Geology Department,” he said.

Getting involved with hominins

Prior to the H naledi discovery, Prof Kramers had already collaborated with Wits researchers to establish the ages of other hominid fossils found in the Cradle of Humankind area in Muldersdrift, west of Johannesburg.

“In 2002 while on sabbatical leave, I walked into Prof. Lee Berger’s office at Wits and introduced myself as someone who might be able to date fossil-bearing sediments. The fossil-bearing deposits of the Cradle of Humankind are in almost all cases much older than the 500,000 year reach of uranium-thorium disequilibrium dating we used for climatology,” said Prof Kramers.

The result of his initiative was a reassessment of the Sterkfontein cave system in the Cradle of Humankind. Specifically, Member 4, the most important Australopithecus africanus fossil, was dated as between 2.6 and 2.0 million years old. Subsequently Prof Kramers and his collaborators extended their work to Swartkrans and Cooper’s Cave. After Australopithecus sediba was discovered at the Malapa locality in August 2008, a cave flowstone sample was taken from just below the fossil-bearing unit, and found to be 2.025 million years old with acceptable uncertainty limits around 1%, by Prof Kramers working in Berne, Switzerland at the time and another researcher in Melbourne.

“The combined [hominid dating] results provided a compelling picture, showing A. africanus existed from about 2.8 to 2.0 million years, A. robustus from possibly 2.3 to 1.5 million years, and A. sediba existing at 2 million years but with an unknown life span,” said Prof Kramers.

Prof Kramers said his earlier work on paleoclimate projects focusing on the record contained in stalagmites in caves led to his research on the ages of hominin fossils. In paleoclimate projects he and his collaborators found amazing teleconnections between climate fluctuations in the tropics and those recorded in arctic and Antarctic ice caps.

“While research is usually planned, proposal-driven and budgeted accordingly, the instances where something totally unexpected but potentially important crosses your path should not be ignored. As a researcher, expect the unexpected,” he said.

Only comet fragments ever

In the 1970’s when Prof Kramers was working at the Bernard Price Institute of Geophysical Research (BPI Geophysics) at Wits, his main job was to use lead isotopes to trace the origin of kimberlites and diamonds. Years later, he would be challenged with finding the origin of one of the most exotic samples ever to cross his path.

“In 2011, Marco Andreoli, then working at the Nuclear Energy Corporation of South Africa (NECSA), introduced the group at UJ to some small fragments of a mysterious 30 gram black stone that had been found in the south-western desert of Egypt, in an area known for the occurrence of so-called Libyan Desert Glass. A scarab crafted out of such natural yellowish glass graces the breast plate of Tutankhamun’s mummy. The stone was later called ‘Hypatia’. Research on its mineralogy and chemistry is currently ongoing,” said Prof Kramers.

“That [glassy] material was formed by the local surficial melting of the sand and soil in the area, probably caused by an immense burst of heat from above. This event has been dated at 28.2 million years by the argon method.”

At that time the noble gas laboratory in the Spectrum Analytical Facility at UJ, which had been donated by De Beers Geoscience in 2006 and is now mainly dedicated to argon geochronology, provided at least one way to test whether the material was of terrestrial (from Earth) or extraterrestrial (from outside Earth) origin: using the isotopic composition of noble gases, especially argon.

Continued Prof Kramers: “Georgy Belyanin of UJ’s Geology Department found argon-40/36 abundance ratios indicating an extraterrestrial origin. The only two types of carbon-dominated extraterrestrial objects known are graphite-rich inclusions in some iron meteorites, and comets. Based on a number of mineralogical features we concluded that the stone was a comet fragment, shocked into its hard, diamond bearing state by its extremely rapid entry into the atmosphere (up to 70 km/sec). As such it would be the first comet fragment ever found on Earth, and a resource for research into undifferentiated matter of the outer solar system.”

Concluded Prof Kramers: “Isotope research in Geology and related fields has the immense power to provide answers to fundamental questions ranging from the very beginning of our solar system to the emergence of our own species.” 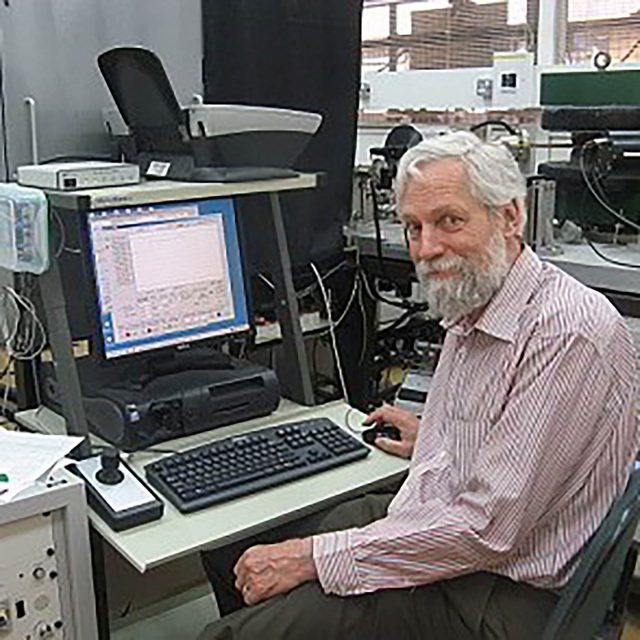