The University of Johannesburg’s (UJ) FNB UJ rugby team continued its winning streak at home over City rivals FNB Wits rugby team, snatching a 29-24 victory in the dying minutes of the game at the UJ Rugby Stadium. This was UJ’s second win in the Varsity Cup tournament.

The undying support of the UJ fans at the stadium encouraged FNB UJ to play better. This year, the Orange Army’s (UJ) performances have improved compared to the previous season. Although FNB UJ has drawn one and lost two games in this campaign thus far, the score margins have not been wide.

FNB UJ dominated the first half of the match. FNB Wits opened the score with a 3-points penalty, but UJ soon took the lead with Darnell Osuagwu’s 5-point try and a successful conversion by Shaun-Christian Baxter. Another try by Likhaya Tengimfene extended FNB UJ’s lead with Baxter’s second successful conversion ensuring that UJ went into the half-time break leading 17-3.

Prior to kick-off, FNB UJ sat in a precarious position as the 9th placed side on the combined 2021-22 FNB Varsity Cup log. As per tournament regulations, the teams that finish at ninth and 10th at the end of this season will be automatically relegated to the FNB Varsity Shield.

The pressure was on FNB UJ to deliver. FNB UJ bossed the scrums and breakdowns – with co-captain Johannes Terblanche enjoying a big game on the ground. They converted several attacking chances in wet and challenging conditions and showed fortitude on defense.

The trend for the UJ side this year has indicated that they score most points in the first half with their opposition catching up in the second half of the game. This was the case with the Wits game, FNB Wits managed to break the FNB UJ defence to score three tries and two successful conversions turning the score to a 24-17 lead in the 68th minute of the game.

However, a point of origin try by the co-captain, Kelvin Kanenungo, put UJ back in the game by leveling the score at 24-all. The last quarter of the match was a nail-biting period for the hosts. Baxter was instrumental in raking in the points for FNB UJ with a 98% conversion rate, something which they lacked in the 2021 season.

The win puts FNB UJ in 5th place on the 2022 Varsity Cup log with 15 points after 5 matches played. The Orange Army will be facing FNB Madibaz who are in 8th position on the log table on 21 March 2022 at Madibaz Stadium in the Eastern Cape.

The result sees FNB UJ moving out of the relegation zone – for now. In the context of the current season, they remain in the hunt for a spot in the semi-finals.

Varsity Cup Round 5 results and scorers: 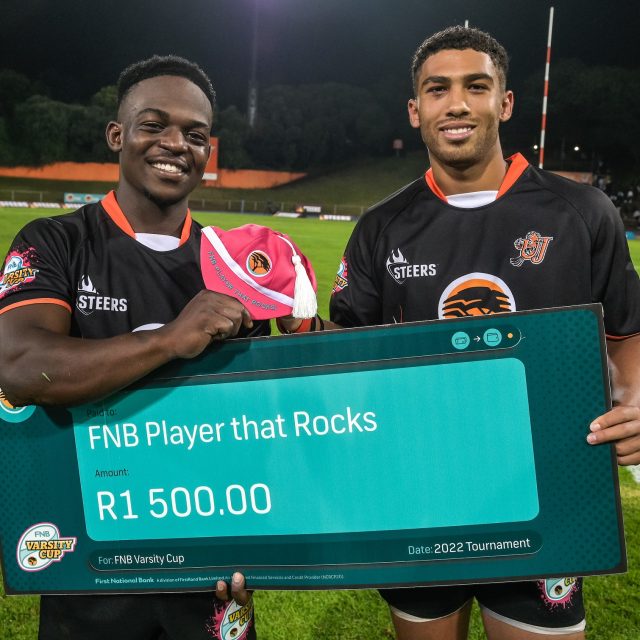