New chemistry ‘forensics’ indicates that the stone named Hypatia from the Egyptian desert could be the first tangible evidence found on Earth of a supernova type Ia explosion. These rare supernovas are some of the most energetic events in the universe.

This is the conclusion of a new study published in the journal Icarus, by Jan Kramers, Georgy Belyanin, and Hartmut Winkler of the University of Johannesburg (UJ), and others.

Since 2013, Belyanin and Kramers have discovered a series of highly unusual chemistry clues in a small fragment of the Hypatia Stone.

In the new research, they eliminate ‘cosmic suspects’ for the origin of the stone in a painstaking process. They have pieced together a timeline stretching back to the early stages of the formation of Earth, our Sun, and the other planets in our solar system.

Their hypothesis about Hypatia’s origin starts with a star: A red giant star collapsed into a white dwarf star. The collapse would have happened inside a gigantic dust cloud, also called a nebula.

That white dwarf found itself in a binary system with a second star. The white dwarf star eventually ‘ate’ the other star. At some point, the ‘hungry’ white dwarf exploded as a supernova type Ia inside the dust cloud.

After cooling, the gas atoms which remained of the supernova Ia started sticking to the particles of the dust cloud.

“In a sense, we could say, we have ‘caught’ a supernova Ia explosion ‘in the act’, because the gas atoms from the explosion were caught in the surrounding dust cloud, which eventually formed Hypatia’s parent body,” says Kramers.

A huge ‘bubble’ of this supernova dust-and-gas-atoms mix never interacted with other dust clouds.

Millions of years would pass, and eventually, the ‘bubble’ would slowly become solid, in a ‘cosmic dust bunny’ kind of way. Hypatia’s ‘parent body’ would become a solid rock sometime in the early stages of the formation of our solar system.

This process probably happened in a cold, uneventful outer part of our solar system – in the Oort cloud or in the Kuiper belt.

At some point, Hypatia’s parent rock started hurtling towards Earth. The heat of entry into the earth’s atmosphere, combined with the pressure of impact in the Great Sand Sea in south-western Egypt, created micro-diamonds and shattered the parent rock.

The Hypatia stone picked up in the desert must be one of many fragments of the original impactor.

“If this hypothesis is correct, the Hypatia stone would be the first tangible evidence on Earth of a supernova type Ia explosion. Perhaps equally important, it shows that an individual anomalous ‘parcel’ of dust from outer space could actually be incorporated in the solar nebula that our solar system was formed from, without being fully mixed in,” says Kramers.

“This goes against the conventional view that dust which our solar system was formed from, was thoroughly mixed.”

To piece together the timeline of how Hypatia may have formed, the researchers used several techniques to analyse the strange stone.

In 2013, a study of the argon isotopes showed the rock was not formed on earth. It had to be extraterrestrial. A 2015 study of noble gases in the fragment indicated that it may not be from any known type of meteorite or comet.

In 2018 the UJ team published various analyses, which included the discovery of a mineral, nickel phosphide, not previously found in any object in our solar system.

At that stage, Hypatia was proving difficult to analyse further. The trace metals Kramers and Belyanin were looking for, couldn’t really be ‘seen in detail’ with the equipment they had. They needed a more powerful instrument that would not destroy the tiny sample.

Kramers started analysing a dataset that Belyanin had created a few years before.

In 2015, Belyanin had done a series of analyses on a proton beam at the iThemba Labs in Somerset West. At the time, Dr Wojciech Przybylowicz kept the three-million Volt machine humming along.

In search of a pattern

“Rather than exploring all the incredible anomalies Hypatia presents, we wanted to explore if there is an underlying unity. We wanted to see if there is some kind of consistent chemical pattern in the stone” says Kramers.

Belyanin carefully selected 17 targets on the tiny sample for analysis. All were chosen to be well away from the earthly minerals that had formed in the cracks of the original rock after its impact in the desert.

“We identified 15 different elements in Hypatia with much greater precision and accuracy, with the proton microprobe. This gave us the chemical ‘ingredients’ we needed, so Jan could start the next process of analysing all the data,” says Belyanin. 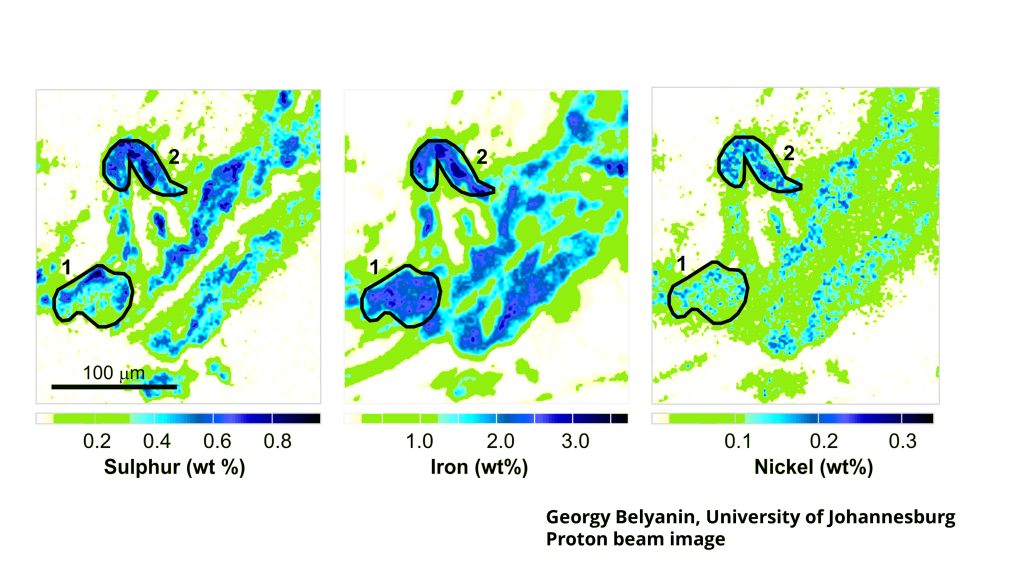 The first big new clue from the proton beam analyses was the surprisingly low level of silicon in the Hypatia stone targets. The silicon, along with chromium and manganese, were less than 1% to be expected for something formed within our inner solar system.

“We found a consistent pattern of trace element abundances that is completely different from anything in the solar system, primitive or evolved. Objects in the asteroid belt and meteors don’t match this either. So next we looked outside the solar system,” says Kramers.

Not from our neighbourhood

Then Kramers compared the Hypatia element concentration pattern with what one would expect to see in the dust between stars in our solar arm of the Milky Way galaxy.

“We looked to see if the pattern we get from average interstellar dust in our arm of the Milky Way galaxy fits what we see in Hypatia. Again, there was no similarity at all”, adds Kramers.

At this point, the proton beam data had also ruled out four ‘suspects’ of where Hypatia could have formed.

Not a red giant

The next simplest possible explanation for the element concentration pattern in Hypatia, would be a red giant star. Red giant stars are common in the universe.

But the proton beam data ruled out mass outflow from a red giant star too: Hypatia had too much iron, too little silicon and too low concentrations of heavy elements heavier than iron.

Nor a supernova Type II

The next ‘suspect’ to consider was a supernova type II. Supernovas of type II cook up a lot of iron. They are also a relatively common type of supernova.

Again, the proton beam data for Hypatia ruled out a promising suspect with ‘chemistry forensics’. A supernova type II was highly unlikely as the source of strange minerals like nickel phosphide in the pebble. There was also too much iron in Hypatia compared to silicon and calcium.

It was time to closely examine the predicted chemistry of one of the most dramatic explosions in the universe.

A rarer kind of supernova also makes a lot of iron. Supernovas of the type Ia only happen once or twice per galaxy per century. But they manufacture most of the iron (Fe) in the universe. Most of the steel on earth was once the element iron created by Ia supernovas.

First, a red giant star at the end of its life collapses into a very dense white dwarf star. White dwarf stars are usually incredibly stable for very long periods and most unlikely to explode. However, there are exceptions to this.

Also, the white dwarf star that explodes in a supernova Ia is not just blown to bits, but literally blown to atoms. The supernova Ia matter is delivered into space as gas atoms.

In an extensive literature search of star data and model results, the team could not identify any similar or better chemical fit for the Hypatia stone than a specific set of supernova Ia models.

“In this respect, the proton beam laboratory data on Hypatia fit to supernova Ia data and models.”

Altogether, eight of the 15 elements analysed conform to the predicted ranges of proportions relative to iron. Those are the elements silicon, sulphur, calcium, titanium, vanadium, chromium, manganese, iron and nickel.

Not all 15 of the analysed elements in Hypatia fit the predictions though. In six of the 15 elements, proportions were between 10 and 100 times higher than the ranges predicted by theoretical models for supernovas of type 1A. These are the elements aluminium, phosphorus, chlorine, potassium, copper and zinc.

“Since a white dwarf star is formed from a dying red giant, Hypatia could have inherited these element proportions for the six elements from a red giant star. This phenomenon has been observed in white dwarf stars in other research,” adds Kramers.

If this hypothesis is correct, the Hypatia stone would be the first tangible evidence on Earth of a supernova type Ia explosion, one of the most energetic events in the universe.

The Hypatia stone would be a clue to a cosmic story that started during the early formation of our solar system, and be found many years later in a remote desert strewn with other pebbles.