The 2021 sports season has started on a positive note for University of Johannesburg (UJ) alumnus, Pieter du Preez. He won the 2021 Sportsman of the Year with a Disability Award at the 15th annual South African Sports Awards on Saturday, 12 March 2021.

Du Preez was nominated alongside Ntando Mahlangu and Mpumelelo Mhlongo.

In November 2021, du Preez was named the UJ Club Sportsperson of the Year at the annual UJ Sports Awards. This came after his excellent showing and winning accolades in international championships. He added to South Africa’s medal tally after winning a gold medal in the Men’s H1 time trial in the 2020 Tokyo Paralympic Games in August 2021.

Despite getting injured in August 2020, du Preez also brought home gold and silver medals after stellar performances in the 2021 Para-cycling Road World Championships in Cascais, Portugal between 9 and 13 June 2021. He took first position in the road race and came second in the time trial.

“This was the 5th time I had been nominated for this award, but had never won it. I think they just could not ignore me anymore [haha]. I have been incredibly consistent in the past 14 global championships, winning six gold medals in two sports over the years. It’s an honour to receive such an accolade after not winning it for a long time. I’m humbled,” says du Preez.

He adds, “Obviously, a big part of this goes to those who have been part of my journey. It would not have been possible without them. I would like to thank Minister Nathi Mthethwa and his team at the Department of Sports, Arts and Culture as well as SASCOC for hosting such a successful Awards ceremony celebrating the amazing South African athletes. Of course it’s also great for me to show other people with disabilities, especially quadriplegics who have so little function like I do, that they can achieve great things.”

Du Preez has his eyes set on the 2024 Paralympics which will be organised in Paris, France. “I’ve had some good performances already in provincial and national competitions. Winning this award certainly motivates me. The end goal is to go to Paris in 2024 if my eyesight, which is deteriorating, and God, carries me all the way there.

“But on the road Paris, I will be working on defending my rainbow Jersey at world championships in Canada in August this year. Next up as training events will be SASAPD national championships on the track in Germiston in the second half of March and Ironman South Africa 70.3 in early April. I will then go to the World Cup in early May this year,” says du Preez.

Ronald Brown was another UJ alumnus who was also nominated in the SA Sports Awards in the category Newcomer of the Year. He was nominated together with Miné De Klerk (winner) and Janneman Malan.

Brown was and continues to be instrumental in the Blitzboks squad that has been touring the world playing in the HSBC World Rugby 7s Series. The HSBC World Rugby Sevens is a series of tournaments organised around the world in which men’s and women’s national sevens teams compete for series points. Previously, the Blitzboks won the series on four occasions, namely; in the 2008/09 season, as well as back-to-back in 2017/2018 and in 2021 in Vancouver, Canada and Dubai, UAE.

Below is a list of the winners and nominees of the 2021 SA Sports Awards: 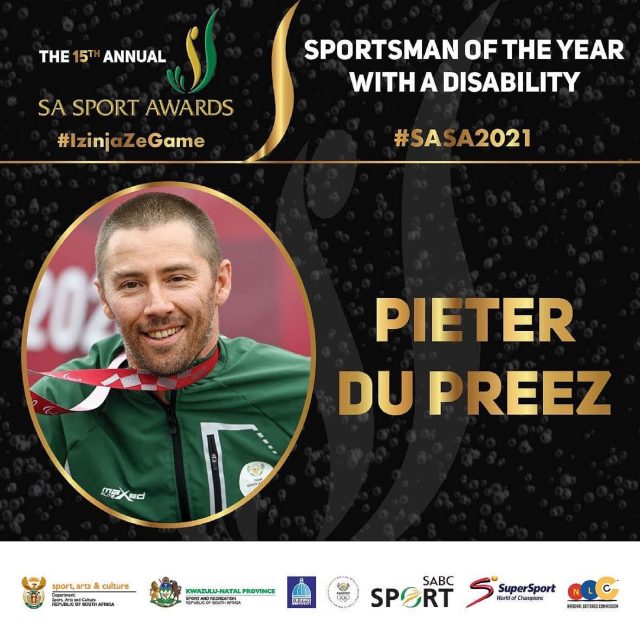