​Khulani Mzamo Sikhosana is one of the students at the University of Johannesburg (UJ) who defied all odds to reach their dreams. With just a few months left until he completed his Retail Business Management degree in 2012, Sikhosana fell from an elevated position and injured his spinal cord and the nervous system. Despite the injury, this year he joined the 8 400 March-April 2014 UJ graduates, walking on his crutches across the stage to get capped.​
After being admitted in hospital back in 2012 and when he could not feel or move his legs, the doctors at Johannesburg Hospital told Sikhosana he would not be able to walk again. Until the accident, Sikhosana was an active child growing up. He played soccer at Rebontsheng Primary School in Vosloorus, in the East Rand, winning the Boksburg District Sports Competition league title with his team. He also scooped a silver medal in long distance marathon and walked away with a bronze medal for long jump while he was in primary school. Later he matriculated from P.T Xulu High School.
While growing up, Sikhosana did not limit his abilities to a single sport or activity, and so was also a dancer and choreographer for township dance groups. He also loved fashion design, a career he pursues until today. Following his accident, Sikhosana underwent a rehabilitation programmes at Netcare. During his recovery, he used a wheelchair and began participating in wheelchair basketball and athletics.
“I couldn’t dance anymore but I then shifted my energy to playing drums. This way I could still take part in dancing by creating rhythm and making people happy. I use poetry and fine arts to create music and rhythm,” says Sikhosana.
Previously, Sikhosana stayed at Mariston Hotel, a student accommodation in the Johannesburg CBD. Like other underprivileged students at UJ, Sikhosana sold used textbooks to other students to supplement his finances at tertiary. In his first-year at UJ, he would commute by train from Voloorus to attend lectures in Auckland Park.
The 23-year-old hopeful says his odds made him stronger – not only physically, but mentally as well. His future dreams are now set on opening his own retail company that will produce African products inspired by history and arts. Sikhosana hopes to create employment opportunities for young township dwellers who have a love for fashion and arts creativity.
My injuries led to my physical disability. However, I do also believe that my disability is temporary and my condition is improving every day. Anyone can achieve whatever they want – as long as they set their body and soul to it. Positive thinking brings out positive results. When one needs to do something in life, they start small – you crawl before your walk, then walk before running and maybe fly as well. It is all in your mind,” says Sikhosana, with a determined attitude.
This year, after facing challenges during his academic journey at UJ, Sikhosana is doing a bridging course to study B-Tech in Retail Business Management at UJ. 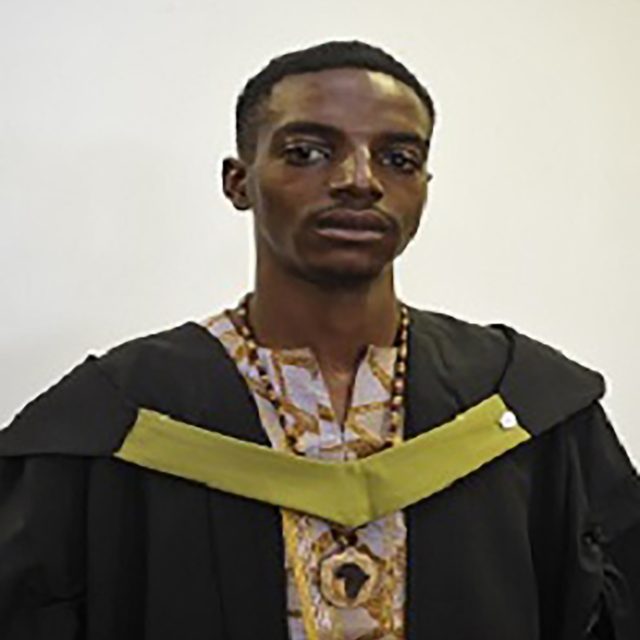