It presents in a pocket-sized kit yet its revolutionary impact has rapidly changed society’s outlook on DNA Barcoding, as older methods of data collection fall away. The African Centre for DNA Barcoding (ACDB) at UJ’s Botany and Plant Biotechnology Department recently championed the introduction of an exciting new smartphone application known as LifeScanner to fellow staff, students and colleagues.

The app is designed to help users discover the diversity of living organisms around them, aiding them in contributing to a global knowledge-base on biological diversity. Users of this app will be able to learn about the species they encounter – from the food they eat, to bugs in the garden. The app is a significant step towards clamping down on wildlife crime, especially in the South African context.

Each kit comes with four specimen vials, each containing a DNA preservation fluid for animal and insect tissues, a pair of tweezers, collection instructions, and return shipment bag specifically designed for bio-materials. Also included is a padded mailing envelope for the return of the vials to the closest LifeScanner Lab where the captured specimens are analysed and captured on a global database, which is accessible to all users of the app.

ACDB partnered with local government officials towards combating wildlife crime, offering a LifeScanner App Training Course, which was attended by colleagues from the Department of Environmental Affairs at the Kingsway campus. The training was conducted by Canadaian founder, Sujeevan Ratnasingham from the University of Guelph’s Biodiversity Institute of Ontario, who said the app is incredibly powerful because it enhances our interaction with the living world.

Previously, access to DNA technology and biodiversity data was a huge challenge, said Ratnasingham, but today users can log onto the app to find out important facts such as: “Is the species going to bite me? Is it a malaria carrying mosquito?” He said the app is bound to enhance the teaching and learning of students. It also serves as useful tool to centres such as ACDB and its affiliated Barcode of Wildlife Project, which advocate against wildlife crimes including the poaching of rhinos, cycads and ivory. “Even though some of the crimes are taking place outside of South Africa, it still has a lot of illegal trade ports for trading,” he cautioned.

The app had UJ students abuzz on Klipbokkop Mountain Reserve during their third-year Botany excursion in Cape Town. Guided by senior students of the department, they were tasked to explore the app, collecting samples of plants and insects that would be analysed using the app. ACDB also hosted 24 Sri Lankan Environmental Officials as well the Deputy Director-General for Environmental Programmes, Dr Guy Preston, for a workshop aimed at showcasing the ongoing DNA Barcoding initiatives in South Africa as well the future application of the LifeScanner (http://lifescanner.net/).

“It is an interesting time to be in this field,” Masters candidate, Sanele Shiba. “The app not only enhances data collection but simplifies science enough to reach the layman. It also brings back the ‘cool’ in science. The third-year students enjoyed their first Lifescanner app experience.” 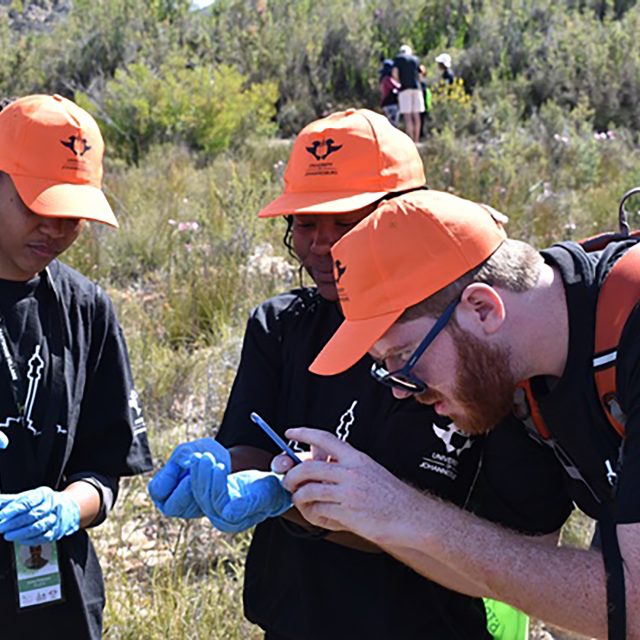