Coming home to another culture – the story of the UJ Choir

​Against great odds, the UJ choir went from almost only white to completely integrated – and globally recognised – in a few years. For these 63 talented people both African and Western music is home, a beautiful diverse comfort zone. Singing together, the UJ choir members build bridges between the cultures in South Africa.

In 2005, the year of the academic merger, the UJ choirmaster’s worst nightmare came true. For years she had trained the almost all-white RAU Choir to sing mostly Western music. At the time another choir associated with the university, the RAU Chorale, sang mostly African music.

The thinking was then, and still is, that a choir can sing either Western or African music well, but not both. It is impossible to coach a truly African and truly Western sound out of the same people, said academics and lay people alike, citing lots of technical musical problems. One would end up with a sound that would never blend really smoothly, went the reasoning.

Then came the bombshell.

“Would you be prepared to merge the two choirs?,” asked her boss, Rita van den Heever, the Cultural Officer.

Choirmaster Renette Bouwer, well known as a conductor of choirs winning international competitions and a solo singer herself, was faced with a dilemma.

She could refuse and pretty much end her career training a great university choir. Or she could try the ‘impossible’ – merging the two choirs – and see where it takes her.

Bouwer said yes, with two conditions, even though the thought made her wake up in a sweat at night.

“I wanted to audition all the singers. I wanted to make sure the people have the potential to grow into what I wanted to teach them with Western music. The auditions would not be based on colour, but on musical talent alone.

“And I wanted someone to advise me about African music, because I know almost nothing about it and I don’t want to pretend to know. Because that is the worst kind of stress – to pretend you know how to do something, but you don’t.”

Finding the person to train the choir on African music was not difficult. Bouwer had noticed a young choir master by the name of Sidumo Jacobs at choir festivals a few years before. Jacobs was from Cradock in the Eastern Cape. He had trained as a choirmaster at the University of Port Elizabeth (UPE), now known as the Nelson Mandela Metropolitan University, with conductor Junita Lamprecht. While studying he got experience helping the UPE Choir with African music. By 2001 Jacobs had trained the RAU Choir to sing some African songs, a few weekends a year.

“He had a fantastic conducting technique already, so much better than mine. I just learned bits and pieces on my own, but he had this beautiful way of conducting,” says Bouwer.​ 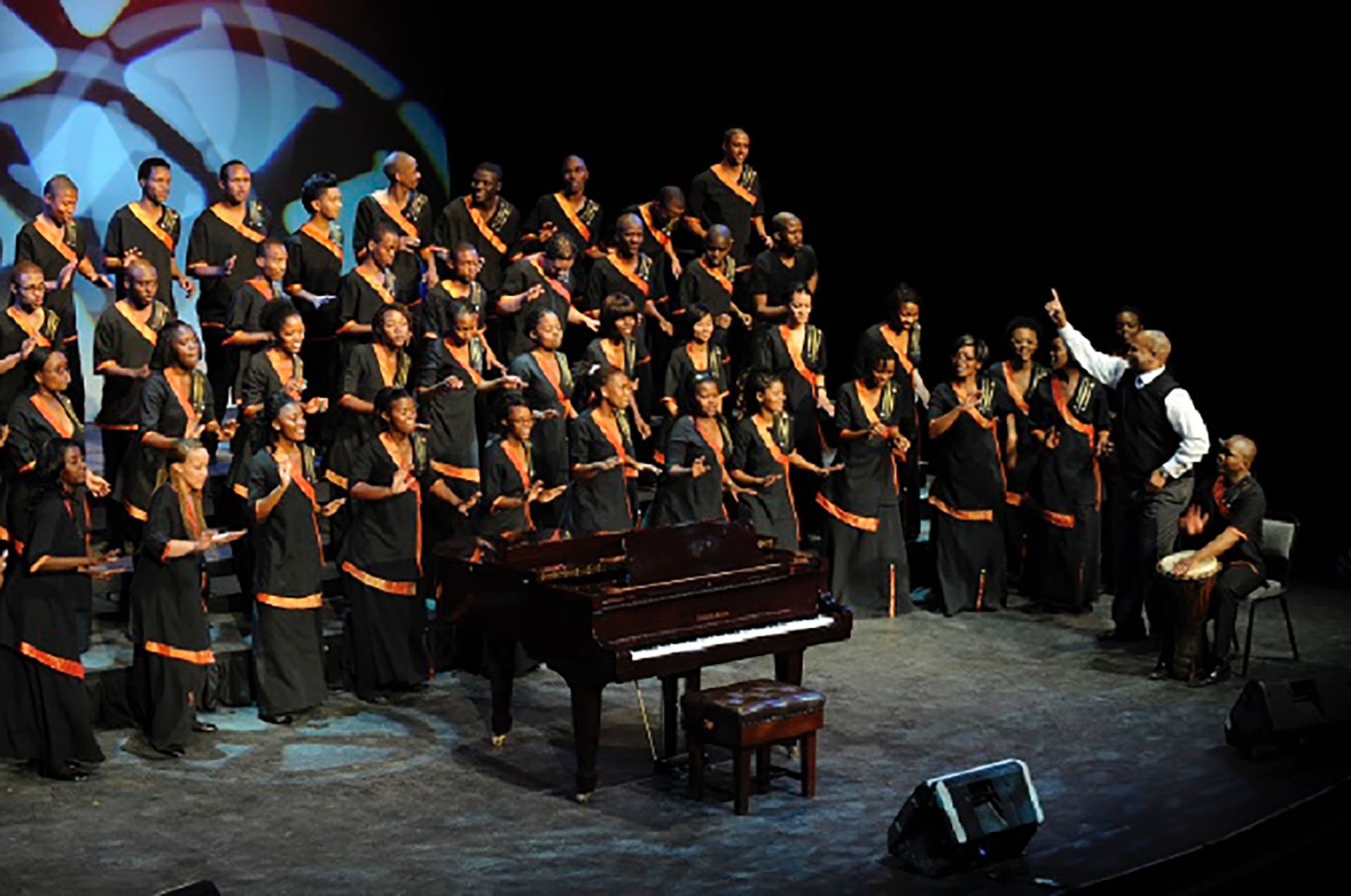 When Jacobs moved to Johannesburg to become a music teacher at St John’s College, Bouwer immediately asked him to become the part-time African music conductor for the UJ Choir.

So how did a white choirmaster figure out whether black singers have talent or not?

Bouwer found she could not rely on her existing talent-finding techniques any more. Previously the students coming for auditions in the almost all-white choir all had official training in Western choir music. They knew not to imitate opera singers. They could easily sing semi-tones, the half-steps in European music scales so beloved of classical composers like Bach, Mozart and Beethoven. Bouwer knew what to look for and how during an audition.​

Now, when students from tiny villages in rural areas came to audition for the merged UJ Choir, she had to start listening in a new way altogether. They may not have heard Western music before. Many were unable to sing semi-tones on their first try. Some had trouble singing something that Bouwer played on the piano. In her previous RAU choirmaster life, she would fail students immediately for these problems.

And yet, the talent was there. She just had to find new ways of finding it. This cost her her usual way of working. Previously a student would sing one audition to get into the choir. Now Bouwer would let students come for ‘pre-auditions’ instead, let the successful ones sing in the choir for a few months and then do the final audition for the coveted spots.

The pre-audition became a training session of sorts, says Bouwer. If someone had not heard semitones before, she would introduce them to these difficult-to-sing notes. She would coach them through a few little exercises, trying to see if the person would ‘get it’ before the main audition in a few months’ time.

Meanwhile students who were used to choirs apart, now had to face a choir together. All of a sudden, everyone was singing everything. The comfort zone of sticking to music from ‘your culture’ only was torn away.

At least they knew about semi-tones because of the pre-auditions. But there were lots of words to learn off by heart in European languages like Finnish, Russian and German. Slowly, over a year or three, each singer learnt to read Western music notation well enough for choir singing.

The students who did not know African music faced new challenges too. Local languages to pronounce properly. Immensely subtle flexibilities in rhythm which cannot be written down. This was completely unlike the predictable sewing machine-like rhythms in European or popular music and could really frustrate those used to reading ‘accurate’ classical music staff notation.

And then there was the difference in music scales, the basic building blocks in melodies. Students who only knew music from English-language or Western-style TV and radio stations were in for a shock. The steps in the African music scale are different to those in European scales. They had to listen hard to their colleagues who knew traditional African music and aim for notes they were not used to.

After the merger, getting along with each other was sometimes difficult, says Bouwer.

“Singing together is a lot like making love – it is really intimate. We had some tension in the beginning. For example, if some people were not ready to sing the Western music, I would not allow them to sing it in concerts. And they would be upset.”

An accounting student called Sabelo Mthembu made all the difference at that time. He sang in the RAU Choir and transferred into the UJ Choir as a senior stu

Mthembu calmed people down. He explained what was going on and helped them, so they would sing better at their next auditions.

“He was the silent peacemaker. If it wasn’t for him, it would have been much more difficult,” says Bouwer.

Working together with Sidumo Jacobs was a partnership from the beginning, says Bouwer.

“Each of us have our own way of working with the choir – and not messing up the ‘other’ sound. I don’t attend his rehearsals and he does not attend mine.”

The experience of this partnership is so good, the idea of maintaining the diversity of expression in the choir without Jacobs is unthinkable, says Bouwer.

A year after the integrated UJ Choir was born, in 2006, it won a gold award and a special jury prize for multicultural achievement in the global competition the RAU Choir had won outright in 2001: the International Choir Competition of of Advent and Christmas Music in Prague.

In 2007, when the UJ Choir was two years old, Bouwer’s boss Rita van der Heever pulled off a cultural hat trick. She invited world-famous composer Karl Jenkins, to come to Johannesburg and conduct his Western choral work “The armed man – a mass for peace” at the Johannesburg City Hall. Jenkins had trained in classical music and started out as a jazz musician.

Some say Jenkins is the living European composer whose work is most often performed around the globe. He has composed music for films, choral works and advertising jingles.

“Armed man” calls for a mass choir, so UJ invited another four choirs to join in.

In 2010, Van den Heever asked Jenkins again. Would he conduct his “Stabat Mater“, a choral work, at the Johannesburg City Hall with the UJ choir and a orchestra of 75? Jenkins accepted.

Stabat Mater also requires a huge choir. For this concert UJ had to rally everyone who had ever sung in the choirs before and after the academic merger. All the RAU Choir and UJ Choir alumni, the then UJ Choir members, together with the Akustika Chamber Singers from Pretoria, gave a splendid performance. 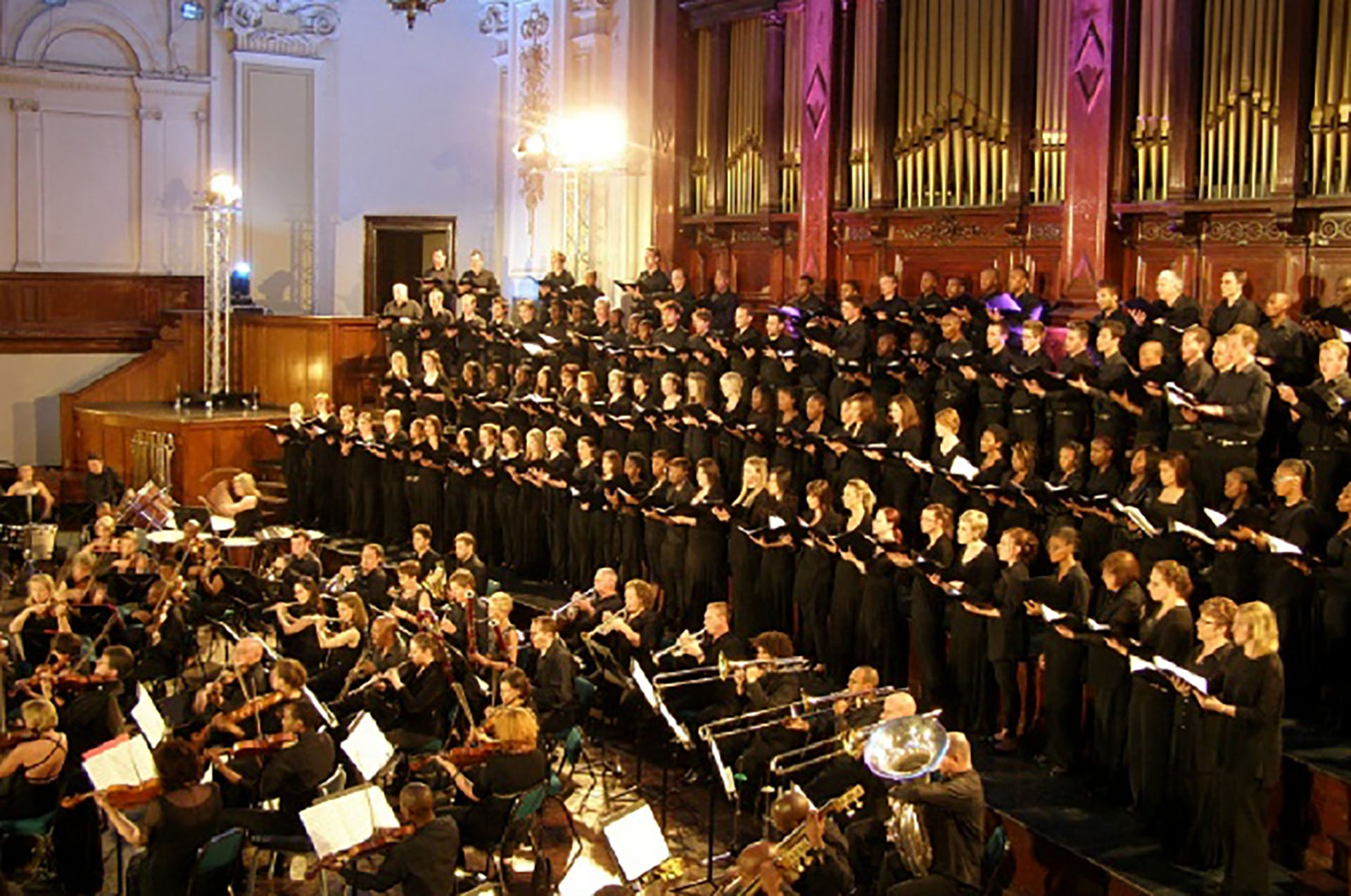 Next year Bouwer and the Choir will invite alumni from the UJ and RAU Choirs to sing with them in a celebration concert.

In 2015, forty years after RAU opened its doors in 1974, ten years after the UJ merger, choir singers from several generations will make gorgeous African and Western music together.

Karl Jenkins was so impressed with the 2010 UJ Choir performance of his Stabat Mater in Johannesburg, he recommended that the choir be invited to perform the work as part of a mass choir at the world-famous Carnegie Hall in New York in January 2011, in the “Concert for Peace – Celebrating the Spirit of Martin Luther King, Jr.” 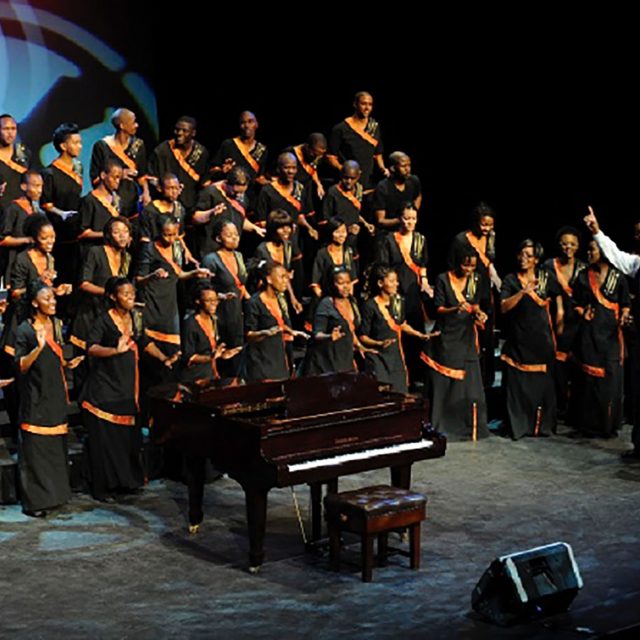