First-year student and gymnast, Caitlin Rooskrantz, has won gold at the 2022 FIG Artistic Gymnastics World Cup in Cairo, Egypt. Though the University of Johannesburg (UJ) does not offer gymnastics and some sports codes, there are a number of students who participate in highly recognised local and global competitions.

The BCom Marketing Management student competed in the bar final on 19 March 2022. Her focus has since shifted to challenging for another top spot in the upcoming Africa Championships in May this year.

The 2022 FIG World Cup circuit in Artistic Gymnastics is a series of competitions officially organised and promoted by the International Gymnastics Federation (FIG) in 2022.

”Winning a gold at the Cairo World Cup 2022 was a great achievement for me. It was my second international gold medal – I won the first one in 2019 at the Hungary Challenge World Cup just before qualifying for the 2021 Olympic Games. This achievement is a big step in my quest to represent South Africa with a podium finish at the Commonwealth Games in Birmingham in July/August this year,” says Rooskrantz.

She adds, “I am really proud of myself. It’s always so good to achieve something like that – it’s a big reward for all my hard work and reassurance that I am on the right track to my ultimate and bigger goals.

It was my dream get a podium finish in the World Cup. I was extremely pleased with the result. It was not my best routine, but I still managed to win a gold medal, which makes me really optimistic for the future and what’s to come,” she says.

Rooskrantz started participating in international gymnastics competitions at the age of 11. Her first international trip was when she travelled to Perth, Australia, where she trained with an local Club. She boasts a colourful resume having participated in competitions such as the 2020 Tokyo Olympic Games, the 2018 and 2019 World Championships, African Championships in 2014, 2016, 2018 and 2021 and World Cups in Slovenia, Baku, and Hungary.

She follows a carefully mastered routine to prepare for competitions. This includes a 8 to 12-week progressive build-up to competitions, including repetitions specific movements which also feature a few internal tests events with internal judges to help prepare for pressure scenarios. Her training schedule, which runs from Monday to Saturday, is made of 4.5 hours a day. On Tuesday and Thursdays, she doubles her training sessions consisting of 5 or 6 hours each.

Like any other sport, gymnasts are prone to injuries. “As a high-performance athlete, injury has played a big role in my journey. I have encountered many, different injuries along the years ranging from minor to serious ones. I suffered the worst knee injury and underwent a surgery in 2017. I went for a MPFL reconstruction and was out of training for 9 months. Due to this injury, despite the fact that I had qualified for the Commonwealth Games in 2018, I was declared medically unfit and thus missed the Games.

“I have also struggled with both my ankles for many years with repetitive ligament tears and damage that my medical team had to constantly get me through,” explains Rooskrantz.

Her major career highlights so far include participating in the Olympic Games, winning two gold medals and being undefeated in Bars African Championship since 2016. Though she did not win a medal in the Olympic Games, Rooskrantz says that this was a valuable experience for her future competitions.

She finished matric at Parktown High School for Girls. She took a gap year in 2019 to pursue her gymnastic dreams. This, she says, paid off. She is part of Johannesburg Gymnastic Centre group and works alongside Exposure Unlimited managed by Bronwyn Roets.

“Making it to the 2020 Tokyo Olympic Games was absolutely everything for me. It was a big dream for many years. It was so dreamlike to be in Tokyo Olympic Games. Though it felt unreal, I started believing I could compete at that level as a grew a bit older and made progress in my career. I made unimaginably great sacrifices to get to the Olympic Games and made history for my Club (Johannesburg Gymnastics Centre) and for gymnastics SA.

“To get the opportunity to compete on an Olympic stage brought me nothing but a great deal of pride and excitement,” says Rooskrantz.

She is preparing for the upcoming Africa Championships in May and later on the World Cup in Bulgaria. 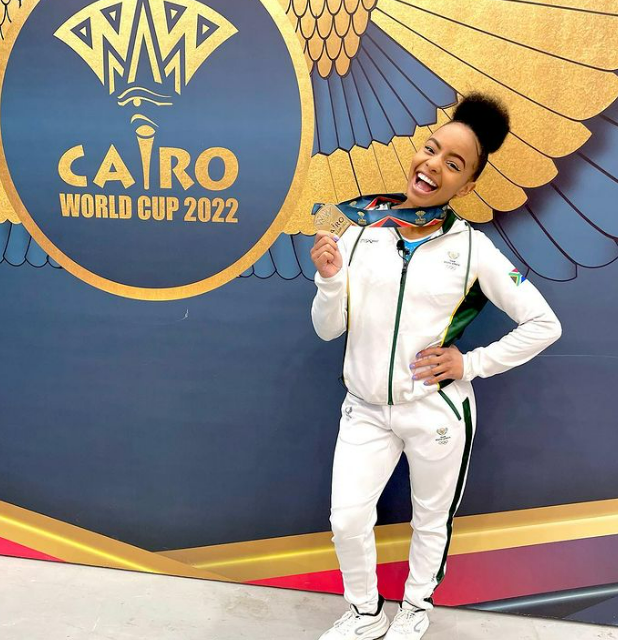