​​​Young people who enjoy building and programming robots are often good candidates for engineering and technology university courses. However, most robotics kits are so costly that few South Africans have the means to enter competitions: a typical global competition robot costs upwards of $1000.

A clever robot does not have to be that expensive though. The microprocessor, or ‘brain’ used in global competitions is easily built into a robot costing a fraction of the price, at around R1500 or USD $100, says Mr Michael Ettershank, manager of the RobotScience project at TechnoLab.

School learners have used Kiwi shoe polish tins, peanut butter jar lids and rubber bands to construct some of the desktop robots on display at Technolab’s facility. Technolab is on the Kingsway campus of the University of Johannesburg (UJ) and forms part of the UJ Faculty of Engineering and the Built Environment.

On Saturday 3 October 2015, Technolab’s AfrikaBot robotics competition will be launched at Zwartkops Raceway near Centurion.

“To make robotics training and AfrikaBot accessible, the P1X8 robot is made partly from junk you may have lying around, while you build the electronics yourself from parts you can order online. You can choose to program the controller microchip with free text or graphical software available on the internet,” says Ettershank.

Teams may use a variety of robotics kits, including the P1X8 AfrikaBot kit developed at UJ TechnoLab, Parallax Basic Stamp, Arduino, Lego and others. Smartphones, tablets or other computers may be used to program the robots. Coders will rejoice that they have the choice of Android, Apple iOS, Linux, BASIC, C, Java, Python and others to choose from. The scoring system will favour robots with home-built electronics like the AfrikaBot which encourages young people to learn about electronics.

The winning robot will drive itself autonomously through an electronically timed maze, but may only touch against the maze in designated places. To enter the AfrikaBot competition the robot must use rechargeable batteries, must be made with something recycled, and must fit through the maze tunnel. Robot parts made on a 3D printer will be permitted in the AfrikaBot competition to encourage innovative design.

Young people across Africa, and from developed countries like the USA and Europe, are all invited to enter the AfrikaBot competition. The first Afrikabot competition will be in October 2016.

“Learners from high schools, colleges and universities have a whole year to build and customize their robots for AfrikaBot 2016,” continues Ettershank.

Certainly, South African learners are likely to give their counterparts tough competition.

Says Ettershank: “In 2013 teenagers Dylan Rheeders and Marco Pretorius, who trained with RobotScience for two years, were placed second at the World Robotics Olympiad, Jakarta Indonesia, beating a team from Germany that was sponsored by BMW AG.

Says Carl Rheeders, father of Dylan Rheeders:”International robotics competitions are amazing experiences for the kids competing. They meet their peers from all over the world and figure out ways of communicating, even if the one speaks English and the other Russian. Also, engineers from international companies come and ask the young competitors questions – their presentation skills have to be as good as their technical skills!”

In July 2015, TechnoLab entered into a partnership with the South African Institute of Electrical Engineers (SAIEE) that will see disadvantaged learners get the opportunity to build their own robots, learn how to program them, participate in AfrikaBot 2016 and get excited about a career as an engineer.

Programme for the AfrikaBot launch:

Draft rules for the AfrikaBot competition:

See the P1X8 robotics kit and what an AfrikaBot can look like at: 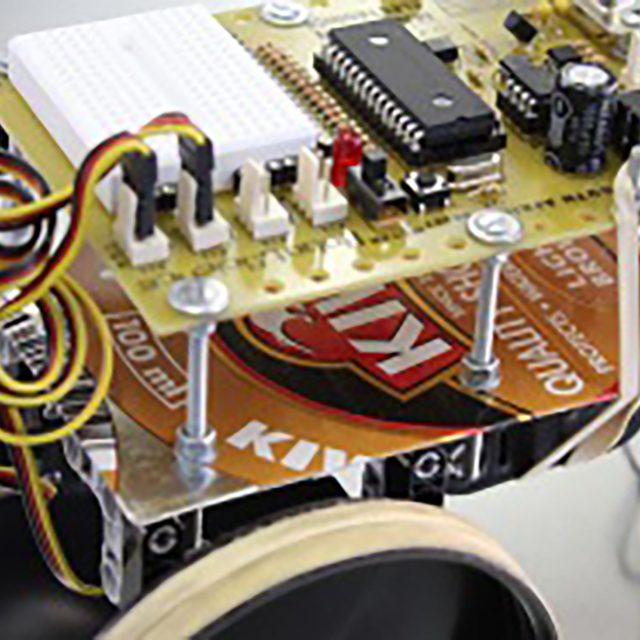