A new personal best for Sabelo Dhlamini at AGN league

After a long preparation period on the track without competitions and seasons full of injuries, Sabelo Dhlamini has clocked a new personal best of 49.89 in the 400m hurdle during the Athletics Gauteng North (AGN) league on the 2nd of March 2022. This is also a Commonwealth Games qualifying time for the fast, tall University of Johannesburg (UJ) student-athlete.

“This means I’m getting better. My effort and sacrifices have been worth it. It feels good because I wasn’t able to compete in the last two seasons and a half. I’m happy that I’m back doing what I love, which is running,” says Dhlamini.

In 2019, Dhlamini was among the top 10 best performing long hurdlers. However, in 2020 his time dropped by almost a second from 51.5 to 52.2. This, he says, was due to competing with shin splints – an injury that causes pain along the shinbone (tibia).

In 2021, post COVID-19 restrictions on all sports, Dhlamini suffered another injury, this time on his left foot. Despite injury setbacks, he continued to compete and won the Central Gauteng Athletics (CGA) provincial championship, making him a 6-time champion in 400m hurdles.

“I’ve always made it my goal to be better than I was the previous year, so when I couldn’t run faster than 51.5 in two years, it was really devastating. At some point, I even considered leaving the sport. The UJ Athletics Manager, Roger Haitengi, convinced me to try again. This is why I am back and doing my best,” explains Dhlamini.

Dhlamini currently trains with the Mbhereko group at UJ Stadium, which includes Olympian Cheswill Johnson and other national champions like Mpho Links. Being part of the group, he says, has enabled him to be perform better.

He is a pursuing a Master’s qualification in Public Management and Governance Coursework at UJ. He began his athletics journey in primary school, but only later on specialised in hurdles during his varsity years.

On running a personal best of 49.8 seconds in the 400m hurdles, Dhlamini says “I didn’t anticipate that I’d run a personal best or get a commonwealth qualifying time in my first hurdles race. My thoughts going into the race were more on running a clean race without bumping any hurdles. I didn’t know I was about run the best race of my life. I’m glad I could do both.”

Dhlamini says he aspires to be one of the best athletes in the world and to also help provide for his family. “My dream has been to wear the green and gold colours for my country, I hope to live this dream this year. I also want to have a national medal, so getting a podium finish at the University Sports South Africa (USSA) or ASA Championships would be great,” he adds.

In the 2nd Athletics South Africa (ASA) Grand Prix in Cape Town on 23 March 2022, three UJ athletes scooped one gold and two silver medals. The results were as follows: 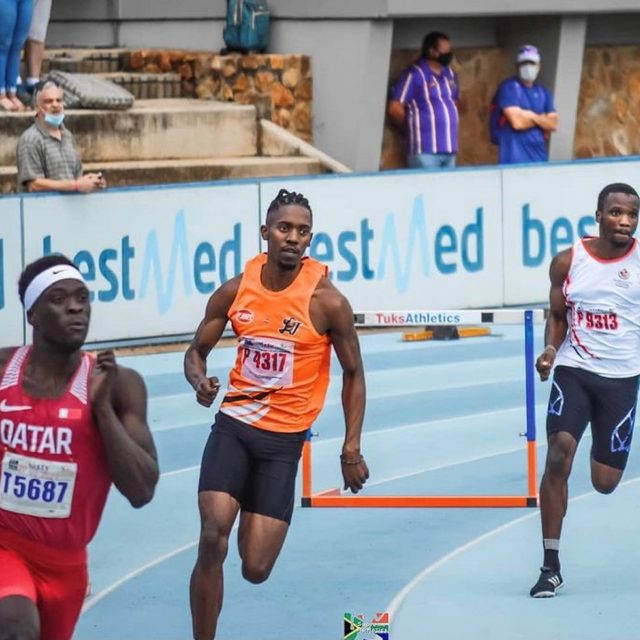