​​​​​“I will never forget standing at the top of the Union Buildings, swelling with pride and looking at the army of 20 000 women marching up step-by-step, gracefully, with dignity and intent. Women of different races and all walks of life. I’d like to mention that because these days it seems as if non-Africans were not participating in the struggle. Many coloured and white women were part of the struggle! I just remember tears of relief and gratitude warming up my face. We did it! We had pulled it off! That is something I will never forget.” ​

These were the sturdy words of the only surviving leader from the historical women’s march of 9 August 1956, Mrs Sophia Williams (De Bruyn), speaking to a room filled to capacity with women philanthropists at the University of Johannesburg’s (UJ) Community Engagement Women in Leadership event, on Tuesday 25 August 2015. During the UJ Women in Community Engagement Projects (UJ WiCEEP) initiative to acknowledge women leadership in service to the community, the struggle icon started off her talk honouring Mrs Florrie Daniels, who has a head count of over 60 years in community work. “I’m struck by her life-work. And was reminded to think of the women of our generation,” she said.

The struggle icon shared invaluable anecdotes to a silent crowd. “There was no laughing and talking, but nobody had instructed the women not to talk. The atmosphere was respectful, with also a little bit of fear I guess, because black people were not allowed in the Union Buildings those days,” reminisced the stalwart, who was only 18-years-old at the time of joining the late heroines Lillian Ngoyi, Helen Joseph and Rahima Moosa in leading and mobilising the protest against the proposed amendments to the Urban Areas Act of 1950. “I was the youngest, they were all my mother’s age. Mam’ Helen Joseph was already 51!”

The stalwart shared her personal account of the activities and intentions leading up to the call to take a stand and petition against the unfair laws of the apartheid regime. She spoke about what had prompted drives of women from the four corners of South Africa at the time to raise funds for travelling to be part of the march. “What drove the cows home was the extension that was going to happen. The men were already carrying passes and did nothing about it. The women started thinking of the same indignation that they would suffer. They would not allow themselves to that degradation.”

At the end of her talk, De Bruyn Williams advised parents to build a proper foundation for their children. She said: “Make sure young people have good examples around them, in order for them to hold good values towards their neighbours and society. That is how we build a strong nation that will carry the baton in this generation, like we took over from the likes of Charlotte Maxeke and the women before our time. In whatever aspect you’re operating in, carry the values from which you came from.” 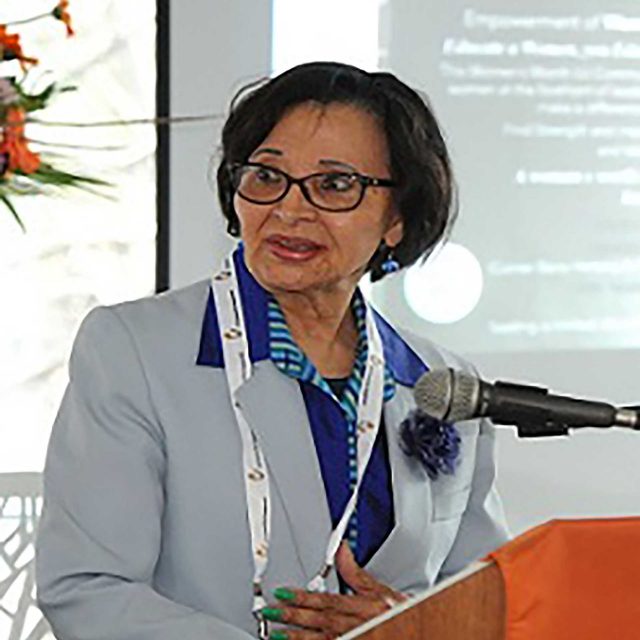